Alfred Desenclos (7 February 1912 – 31 March 1971) was a French composer of (modern) classical music. Desenclos was a self-described "romantic" whose music is highly expressive and atmospheric and rooted in rigorous compositional technique.
To support his family, Desenclos had to renounce continuing his general studies and work as an industrial designer until the age of 20, but in 1929, he entered the Conservatory in Roubaix, France, to study piano. Until that time, he had played only as an amateur.
His sacred music belongs to the tradition begun by Saint-Saëns and continued by Fauré. He won the Prix de Rome in 1942.
Desenclos's Messe de requiem was written in 1963 and published by Durand et Fils in 1967. In 1999, the piece was reprinted under the name of Atlanta-based composer Tristan Foison. Foison's mass was given its "American premiere" on 18 May 1999 in a performance by the Capitol Hill Chorale; soon after, the piece was discovered to be a note-for-note duplicate of Desenclos's. 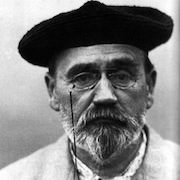