Countess Alexandra Tolstoy FRGS (born Alexandra Tolstoy-Miloslavsky, 1974; married name Alexandra Galimzyanova) is a British equine adventurer, broadcaster and businesswoman, a fellow of the Royal Geographical Society. She has made several long distance journeys on horses which have provided the material for television documentaries, books and talks.

The daughter of Count Nikolai Tolstoy, Tolstoy studied for a Master of Arts degree in Russian at Edinburgh University which enabled her to spend a year in Russia. In 2003, she wrote of Edinburgh that –

It's where I made some of my closest friends and enjoyed four very happy and carefree years... Edinburgh has drinking hours that are the envy of all other British universities. Our only worry was how to fill the time between 4am and 6am, when the pubs were shut... The seeds were sown there for the great passions in my life.

She next moved to London, joining Credit Suisse First Boston's graduate scheme as an Eastern European Equities broker. She resigned after a year and spent the next two years working and travelling abroad during which time she spent six weeks walking the old Camino de Santiago pilgrimage route through Spain.

In 1999, she was part of a team which spent eight months travelling by horse and camel along a 5,000-mile length of the Silk Road. One of the support team members, an Uzbek show jumper, Shamil Galimzyanov, was to become her husband. After the expedition, Tolstoy moved to Moscow to complete her account of the expedition, The Last Secrets of the Silk Road, and to continue travelling in central Asia.  In 2000 Tolstoy and a friend rode 3,000 miles on horseback through Mongolia and Siberia.

In September 2003, Tolstoy and Galimzyanov were married in the Russian Orthodox Cathedral in Bayswater, London, after which they set up their home in a small Moscow apartment. In 2004, they embarked upon the 2,700-mile journey from Turkmenistan to Moscow, retracing an expedition undertaken by twenty-eight Turkmen riders in 1935, who took 84 days to cover the distance. Riding Akhal-Teke horses, they were stopped from completing the journey by an outbreak of foot-and-mouth disease, resuming it in 2006 and arriving in Moscow in November.

When not travelling on her own expeditions, Tolstoy continues to write, organises riding holidays in Central Asia and works both as an interior designer and for BDI, a brand development company assisting European companies to develop their business in the countries of the former Soviet Union.

In 2008, she spent a month filming Horse People with Alexandra Tolstoy, a television series for BBC Television in which she visited five different communities working with horses around the world. The BBC objected to her husband accompanying her, and this was later reported to have tested the marriage. The BBC was hoping for more television work, with a spokesman commenting "Alexandra's Horse People was very popular and she could well do more". Tolstoy was reported in 2009 to be considering making a series about high society in contemporary Russia.

While living in Moscow, Tolstoy taught English to the families of several 'oligarchs' and befriended the billionaire Sergei Pugachev.

Tolstoy's marriage to Shamil Galimzyanov broke down in 2009 shortly after the birth of a baby boy, Alexis. Tolstoy decided not to return to her former home in Moscow and in April 2009 established herself with her son at a house in Chelsea. In June 2009, she was reported to have engaged "highly paid lawyers" to protect her private life.

In the summer of 2009, Tolstoy was staying with Pugachev at a villa in the South of France and was also helping him to find a country estate in England. In December she acquired a farmhouse near Malvern in Herefordshire for herself. Her distant cousin Alexander Nekrassov broke the news that Pugachev was the father of Tolstoy's son.

By 2011, Tolstoy and Pugachev were widely reported to be a couple, with homes in Monaco, London, and Moscow, but Pugachev, now living in exile in London, remained married to Galina, with whom he has children and grandchildren. 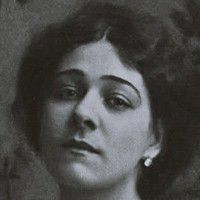