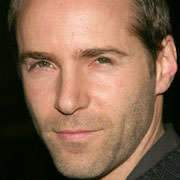 Alessandro Antine Nivola (born June 28, 1972) is an American actor and producer, who has starred in feature films such as Face/Off, American Hustle, and A Most Violent Year.

Nivola was born in Boston, Massachusetts. His mother, Virginia (née Davis), is an artist, and his father, Pietro Salvatore Nivola (born 1944), is a professor of political science. Nivola's paternal grandfather was the Sardinian sculptor Costantino Nivola, and his paternal grandmother, Ruth Guggenheim, was a Jewish refugee from Germany. Nivola has described his mother as "a WASP, from the South", and has stated that she is a relative of Confederate President Jefferson Davis. He has a brother, Adrian, and attended Phillips Exeter Academy and Yale University. Alessandro's family also lived in Burlington, Vermont where he attended Mater Christi School, a ministry of the Sisters of Mercy.

Nivola earned a Drama Desk Award nomination for his first performance on the New York stage in the 1995 Broadway production of A Month In The Country opposite Helen Mirren. Since then he has starred in numerous films including David O. Russell's American Hustle which earned him a Screen Actors Guild Award. Among his other films are Lisa Cholodenko’s Laurel Canyon (Independent Spirit Award nomination for best supporting actor), Coco Before Chanel, Junebug, Mansfield Park, Kenneth Brannagh’s Love's Labor's Lost, Jurassic Park 3, Goal 1 and 2, The Eye, I Want You, Best Laid Plans, Janie Jones, Five Dollars A Day, and John Woo’s Face/Off (Blockbuster Entertainment Award nomination). In 2009 he was given the Excellence in Acting Award at the Provincetown International Film Festival.

In 2013, Nivola was among the New York Times critics’ pics for an Oscar nomination for his performance opposite Elle Fanning and Annette Bening in Sally Potter’s film Ginger and Rosa. In 2014, he appeared in the films The Devil's Knot and A Most Violent Year. He returned to the theater and starred in the 2010 Off-Broadway revival of Sam Shepard's A Lie Of The Mind directed by Ethan Hawke. In 2013 he starred as Sir Robert Morton in the Broadway revival of Terrence Rattigan’s The Winslow Boy. He returned to Broadway in the fall of 2014 starring opposite Bradley Cooper in a revival of The Elephant Man. In 2012, Nivola established the film and television production company King Bee Productions with his wife, actress Emily Mortimer. Their first project was a six-part television series called Doll & Em which Nivola produced and Mortimer wrote and starred in. The program aired on Sky Living in the UK and on HBO in the United States in 2014.

Nivola married British actress Emily Mortimer in Buckinghamshire in January 2003. The couple have two children and live in the Brooklyn borough of New York City.