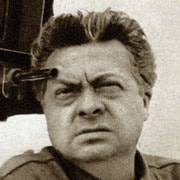 Aldo Fabrizi (born Aldo Fabbrizi; [ˈaldo faˈbrittsi]; 1 November 1905 – 2 April 1990) was an Italian actor, director, screenwriter and comedian, best known in United Kingdom for the role of the heroic priest in Roberto Rossellini's Rome, Open City and as partner of Totò in a number of successful comedies.

Born in Rome into a humble family, Fabrizi debuted on stage in a suburban theater in 1931. He soon got a local success thanks to his comical sketches and macchiette (i.e. comical monologues caricaturing stock characters), and became a star of the Roman revue and avanspettacolo. He made his film debut during the war, in 1942, and in a short time established himself as one of the most talented actors of the time, spacing from comedy to drama. After a number of successful comedies, in 1945 he played the iconic Don Pietro in the neo-realist drama Rome, Open City, and following the critical and commercial success of the film he had a number of leading roles in other neo-realist films. Already active as a screenwriter, in 1948 he debuted as a director with the drama Immigrants. In the 1950s and 1960s he was often paired on the screen with Totò and with Peppino De Filippo. In 1964 he got a large success on stage with the musical comedy Rugantino, he also toured across Europe, in Latin America and in Broadway.

Like the Italian actor Totò and others, Fabrizi was also initiated to the Scottish Rite Freemasonry.

Fabrizi was married to the singer Beatrice Rocchi, best known with her stage name Reginella, until her death in 1981. His sister Elena Fabrizi was also an actress.

Fabrizi during his career won two Nastro d'Argento Awards, for best actor for Alessandro Blasetti's Prima comunione and for best supporting actor in Ettore Scola's We All Loved Each Other So Much, and a special David di Donatello for his career in 1988. He was also awarded at the 1952 Cannes Film Festival for best screenplay for Cops and Robbers. In 1990 Poste italiane issued a stamp in his honor.

The contents of this page are sourced from Wikipedia article on 08 Mar 2020. The contents are available under the CC BY-SA 4.0 license.
View Aldo Fabrizi 's image gallery
Image Gallery

President of the Italian region Veneto 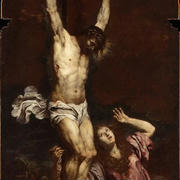