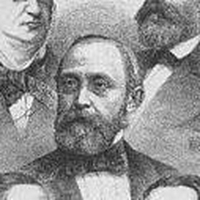 Albert Hänel (10 June 1833, in Leipzig – 12 May 1918, in Kiel) was a German jurist, legal historian and liberal politician. He was one of the leaders of the German Progress Party, and served as Rector of the University of Kiel. He served as a member of the Prussian Chamber of Deputies, the Reichstag of the North German Confederation and the Imperial Reichstag, and was Vice President of both the Prussian Chamber of Deputies and the Imperial Reichstag.

One of the founders of the Liberal Party in Schleswig-Holstein after the annexation of the duchies to Prussia in 1866, he was elected to the Prussian Chamber of Deputies and the Reichstag of the North German Confederation, and subsequently to the Imperial Reichstag. He became known as a leader of the so-called “Fortschrittspartei” or Progressists. After the fusion with the Secessionists in 1884, “Fortschrittspartei” was styled as the “Deutschfreisinnige Partei.” Upon the breakup of the party in 1893, he represented the ‘Freisinnige Vereinigung’ (Liberal Union), but in the elections of the same year to the Reichstag he was defeated by the Social-Democratic candidate. In 1898 he was reelected.