Akua Kuenyehia (born 1947) is a Ghanaian lawyer who served a judge of the International Criminal Court (ICC) from 2003 to 2015. She also served as First Vice-President of the Court. She was one of the only three female African judges at the ICC.
Kuenyehia represented Ghana on the United Nations' Convention on the Elimination of All Forms of Discrimination against Women (CEDAW) committee in 2003 and worked hard to contribute to its reputation and influence.

In March 2009, judges chose Kuenyehia as well as Anita Ušacka of Latvia for appeals positions. Three months later, both of them had to step down from an appeal in the case of Germain Katanga of the Democratic Republic of Congo, on trial for war crimes and crimes against humanity, because they had previously issued his arrest warrant.

In 2013, the University of Ghana named a newly constructed faculty of law building after Kuenyehia. 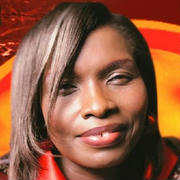