Ahmad Riza Patria (born 17 December 1969) is an Indonesian politician who currently serves as Deputy Governor of Jakarta. He previously served as a Vice Chairman of Commission II in the People's Representative Council of Indonesia. He was elected in the seat of West Java V constituency winning with a total vote of 23,991 in the 2014 legislative elections in 2014.

In 2012, Patria was the running mate of Hendardji Supandji as Deputy Governor during the Jakarta gubernatorial elections in 2012. Previously he was the chairman of the National Youth Council in Indonesia from 1999 to 2002. In 2002, he was re-elected to serve as chairman of the KNPI in Jakarta. Ahmad Patria is a graduate from the Bandung Institute of Technology.

In 2018, Patria was appointed the Spokesperson for presidential candidate Prabowo Subianto Djojohadikusumo. He is also the current Chairman of Gerindra Party central board.

On 6 April 2020, Patria was voted to take on the role of the once vacant Deputy Governor of DKI Jakarta, after winning the vote in the Jakarta DPRD with 81 out of 100 cast votes.

The contents of this page are sourced from Wikipedia article on 24 Jun 2020. The contents are available under the CC BY-SA 4.0 license.
View Ahmad Riza Patria 's image gallery
Image Gallery 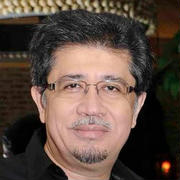