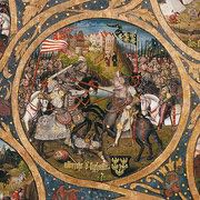 Adalbert, Margrave of Austria
The basics

Adalbert the Victorious was the third son of Leopold the Illustrious and Richardis of Sualafeldgau. He succeeded as Margrave upon the death of his older brother, Henry I, Margrave of Austria.

As Margrave, he extended the eastern border of the then small Ostmark of Bavaria as far as the rivers Morava/March and Leitha and supported King Henry III in his battles against Hungary and Bohemia. He resided in the Lower Austrian Babenberg castle of Melk, where Melk Abbey was to develop later.

Adalbert married first Glismod of West-Saxony. They had no known children.

He married second Frozza Orseolo, who later took the name of Adelheid. She was the sister of Peter Urseolo of Hungary. Frozza was the mother of:

The contents of this page are sourced from Wikipedia article on 09 Mar 2020. The contents are available under the CC BY-SA 4.0 license.
View Adalbert, Margrave of Austria 's image gallery
Image Gallery