Abū Ḥanīfah was born in the city of Kufa in Iraq, during the reign of the Umayyad caliph Abd al-Malik ibn Marwan. His father, Thabit bin Zuta, a trader from Kabul, Afghanistan, was 40 years old at the time of Abū Ḥanīfah's birth.

His ancestry is generally accepted as being of Persian origin as suggested by the etymology of the names of his grandfather (Zuta) and great-grandfather (Mah). The historian Al-Khatib al-Baghdadi records a statement from Imām Abū Ḥanīfah's grandson, Ismail bin Hammad, who gave Abū Ḥanīfah's lineage as Thabit bin Numan bin Marzban and claiming to be of Persian origin. The discrepancy in the names, as given by Ismail of Abū Ḥanīfah's grandfather and great-grandfather, are thought to be due to Zuta's adoption of the Arabic name (Numan) upon his acceptance of Islam and that Mah and Marzban were titles or official designations in Persia, with the latter, meaning a margrave, referring to the noble ancestry of Abū Ḥanīfah's family as the Sasanian Marzbans (equivalent of margraves) of Kabul (Modern day Afghanistan). Those stories maintain for his ancestors having been slaves purchased by some Arab benefactor are, therefore, untenable and seemingly fabricated. There is a discussion on being of Turkic or Persian origin. But the widely accepted opinion, however, is that most probably he was of Persian ancestry from Kabul.

In his reply to al-Mansur, Abū Ḥanīfah said that he was not fit for the post. Al-Mansur, who had his own ideas and reasons for offering the post, lost his temper and accused Abū Ḥanīfah of lying.

"If I am lying," Abū Ḥanīfah said, "then my statement is doubly correct. How can you appoint a liar to the exalted post of a Chief Qadi (Judge)?"

Incensed by this reply, the ruler had Abū Ḥanīfah arrested, locked in prison and tortured. He was never fed nor cared for. Even there, the jurist continued to teach those who were permitted to come to him.

In 767, Abū Ḥanīfah died in prison. The cause of his death is not clear, as some say that Abū Ḥanīfah issued a legal opinion for bearing arms against Al-Mansur, and the latter had him poisoned. It was said that so many people attended his funeral that the funeral service was repeated six times for more than 50,000 people who had amassed before he was actually buried. On the authority of the historian al-Khatib, it can be said that for full twenty days people went on performing funeral prayer for him. Later, after many years, the Abū Ḥanīfah Mosque was built in the Adhamiyah neighbourhood of Baghdad.

The sources from which Abu Hanifa derived Islamic law, in order of importance and preference, are: the Qur'an, the authentic narrations of the Muslim prophet Muhammad (known as hadith), consensus of the Muslim community (ijma), analogical reasoning (qiyas), juristic discretion (istihsan) and the customs of the local population enacting said law (urf). The development of analogical reason and the scope and boundaries by which it may be used is recognized by the majority of Muslim jurists, but its establishment as a legal tool is the result of the Hanafi school. While it was likely used by some of his teachers, Abu Hanifa is regarded by modern scholarship as the first to formally adopt and institute analogical reason as a part of Islamic law.

As the fourth Caliph, Ali had transferred the Islamic capital to Kufa, and many of the first generation of Muslims had settled there, the Hanafi school of law based many of its rulings on the prophetic tradition as transmitted by those first generation Muslims residing in Iraq. Thus, the Hanafi school came to be known as the Kufan or Iraqi school in earlier times. Ali and Abdullah, son of Masud formed much of the base of the school, as well as other personalities from the direct relatives (or Ahli-ll-Bayṫ) of Moḥammad from whom Abu Hanifa had studied such as Muhammad al-Baqir (thus apparently creating a link between Sunnis and Shias). Many jurists and historians had reportedly lived in Kufa, including one of Abu Hanifa's main teachers, Hammad ibn Sulayman.

Abū Ḥanīfah is regarded by some as one of the Tabi‘un, the generation after the Sahaba, who were the companions of the Islamic prophet, Muhammad. This is based on reports that he met at least four Sahaba including Anas ibn Malik, with some even reporting that he transmitted Hadith from him and other companions of Muhammad. Others take the view that Abū Ḥanīfah only saw around half a dozen companions, possibly at a young age, and did not directly narrate hadith from them.

Abū Ḥanīfah was born 67 years after the death of Muhammad, but during the time of the first generation of Muslims, some of whom lived on until Abū Ḥanīfah's youth. Anas bin Malik, Muhammad's personal attendant, died in 93 AH and another companion, Abul Tufail Amir bin Wathilah, died in 100 AH, when Abū Ḥanīfah was 20 years old. The author of al-Khairat al-Hisan collected information from books of biographies and cited the names of Muslims of the first generation from whom it is reported that the Abu Hanifa had transmitted hadith. He counted them as sixteen, including Anas ibn Malik, Jabir ibn Abd-Allah and Sahl ibn Sa'd.

Map of the Muslim world. Hanafi (grass green) is the Sunni school predominant in Turkey, the Northern Middle East, many parts of Egypt, Central Asia and most of the Indian subcontinent

Abu Hanifa ranks as one of the greatest jurists of Islamic civilization and one of the major legal philosophers of the entire human community. He attained a very high status in the various fields of sacred knowledge and significantly influenced the development of Muslim theology.

During his lifetime he was acknowledged by the people as a jurist of the highest calibre.

The honorific title al-Imam al-A'zam ("the greatest leader") was granted to him both in communities where his legal theory is followed and elsewhere. According to some, Abu Hanifa’s followers make up at least 1/3 of the world’s Muslim population some estimate the figure to be over 1/2 of the population.

Abu Hanifa also had critics. The Zahiri scholar Ibn Hazm quotes Sufyan ibn `Uyaynah: "[T]he aﬀairs of men were in harmony until they were changed by Abù Hanìfa in Kùfa, al-Batti in Basra and Màlik in Medina". Early Muslim jurist Hammad ibn Salamah once related a story about a highway robber who posed as an old man to hide his identity; he then remarked that were the robber still alive he would be a follower of Abu Hanifa.

Outside of his scholarly achievements Abu Hanifa was recognised as a man of the highest personal qualities: a performer of good works, remarkable for his self-denial, humble spirit, devotion and pious awe of God.

His tomb, surmounted by a dome erected by admirers in 1066 is still a shrine for pilgrims. It was given a restoration in 1535 by Suleiman the Magnificent upon the Ottoman conquest of Baghdad. 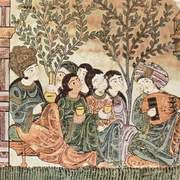