Professor of Law at Emory University School of Law

Abdullahi Ahmed An-Na'im (Arabic: عبد الله أحمد النعيم) (born in 1946) is a Sudanese-born Islamic scholar who lives in the United States and teaches at Emory University. He is the Charles Howard Candler Professor of Law at Emory University School of Law, associated professor in the Emory College of Arts and Sciences, and Senior Fellow of the Center for the Study of Law and Religion of Emory University.

Professor An-Na'im's current research projects include a study of Muslims and the secular state, and of human rights from state-centric to people-centered. He continues to further develop his theory advanced in his book Islam and the Secular State.

An-Naim was born in the Sudan, where he was greatly influenced by the Islamic reform movement of Mahmoud Mohamed Taha. He is a naturalized American citizen, but retains Sudanese citizenship.

In February 2009, An-Na`im received an Honorary Doctorate from the Université catholique de Louvain (UCL, Louvain-la-Neuve) and Katholieke Universiteit Leuven (K.U. Leuven, Leuven), Belgium. He also serves as Global Legal Scholar at the Law School, University of Warwick, UK (until November 2009); and Extraordinary Professor at the Centre for Human Rights, Faculty of Law, University of Pretoria (until November 2009). 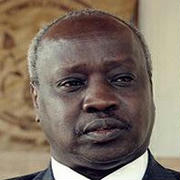 Minister of Defense in the Cabinet of South Sudan