Sharmarke was born in 1919 in the town of Harardhere in the north-central Mudug region of Somalia. His father hailed from the Majeerteen Osman Mohamoud clan and his mother from the Habar Gidir (Sacad Siciid) clan.

Raised in Mogadishu by his mother, Sharmarke attended Qur'anic schools and completed his elementary education in 1936. He then embarked on a career as a trader and later as a civil servant in the Italian colonial administration.

In 1943, the year of its inauguration, Sharmarke joined the incipient Somali Youth League political party. He entered the British administration's civil service the following year.

While still a civil servant, Sharmarke completed his secondary education in 1953. He earned a scholarship to study at the Sapienza University of Rome, where he obtained a BA in Political Science. In 1960, his son, Omar Abdirashid Ali Sharmarke, who would later become Prime Minister of the Somali Transitional Federal Government, was born.

After returning from his studies abroad in Italy in 1959, Sharmarke was elected to the Legislative Assembly.

On 1 July 1960, with the creation of the Somali Republic, the then-incumbent President Aden Abdullah Osman Daar appointed Sharmarke Prime Minister of Somalia. Sharmarke's duties as Prime Minister saw him travel abroad extensively in pursuit of a non-aligned and neutral foreign policy. He remained Prime Minister until March 1964, when the first general elections were held and which saw him re-elected as a member of Parliament.

In the 1967 presidential elections, Sharmarke beat out Daar to become the second President of Somalia. He was sworn into office on July 6, 1967.

In 1968, Sharmarke narrowly escaped an assassination attempt. A grenade exploded near the car that was transporting him back from the airport, but failed to kill him.

On October 15, 1969, while paying an official visit to the northern town of Las Anod, Sharmarke was shot dead by one of his own bodyguards. On duty outside the guest-house where the president was staying, the officer fired an automatic rifle at close range, instantly killing Sharmarke. Observers suggested that the assassination was inspired by personal rather than political motives.

Sharmarke's assassination was quickly followed by a military coup d'état on October 21, 1969 (the day after his funeral), in which the Somali Army seized power without encountering armed opposition — essentially a bloodless takeover. The putsch was spearheaded by Major General Muhammad Siad Barre, who at the time commanded the army.

The contents of this page are sourced from Wikipedia article. The contents are available under the CC BY-SA 4.0 license.
View Abdirashid Ali Shermarke 's image gallery
Image Gallery 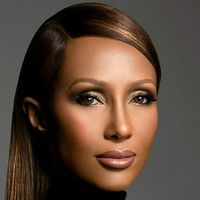 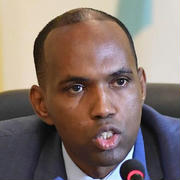 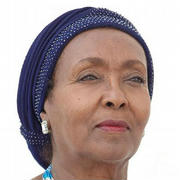