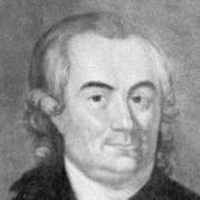 Aaron Isaac (Hebrew: אהרון יצחק‎; lived 1730–1817) was a Jewish seal engraver and merchant in haberdashery. He came from Pommery (Swedish Pomerania), a German-speaking area then part of the Swedish Empire, during the reign of Gustav III, and was persuaded to come to Sweden where there were no seal-engravers at the time. He did this on condition that he could bring with him at least ten Jews, in order to have a minyan (quorum) for prayer. His native language was Yiddish.

It was the age of the Enlightenment, led by philosophers whose works revolutionized the social structure of Europe. Some liberally minded monarchs, like Gustav III, eased restrictions on Jewish settlement. "In 1781, opposed by the Swedish clergy, he pushed through the first law guaranteeing certain religious freedoms. This law gave foreigners the right to practise their religion but it forbade them to proselytize and to encourage Lutherans to leave their faith.". Gustav III, in a letter to his mother, the dowager queen Lovisa Ulrika, wrote, "...It is certain, that it would be highly beneficial to the country, if such a hardworking people as the Jews were to settle here..."

Jewish Settlement through the Eyes of Aaron Isaac

Aaron Isaac had made Swedish contacts during the Seven Years' War, who in turn put him in contact with Carl Sparre, the governor of Stockholm. In 1774, Isaac received permission and moved to Stockholm. In 1775, he, his brother Marcus Isaac, and their companion Abraham Pach were granted licenses to work as seal engravers and as stonemasons.

Although their right to settle in Sweden and practise their religion had been ensured, they had not been accepted into society and were isolated by a fear of being assaulted. Isaac later wrote in his memoirs that "...If I were to write the complete history of how they have persecuted me and my family this book would be too small to contain it. But I saw clearly that God was always on my side and prevailed against my enemies without my having to lift a hand against them."

Throughout his lifetime, by virtue of his contacts with Sparre, Isaac became the gateway through which Jewish immigration passed. He was careful about who would be permitted to immigrate because the reputation of the Jewish community in Stockholm rested upon the usefulness of Jewish assistance to the national economy. Immigration thus focused on relatives of Isaac and Jewish families from Germany that could bring their own capital and start their own businesses.

Prior to Aaron Isaac and Gustav III, Jews in Sweden were required either to convert to Christianity or to live an illegal and nomadic existence. By creating the conditions for Jewish families to remain Jewish and become part of the Swedish nation, they built the foundation for the modern day Jewish community of Sweden.

The contents of this page are sourced from Wikipedia article on 10 Mar 2020. The contents are available under the CC BY-SA 4.0 license.
View Aaron Isaac 's image gallery
Image Gallery