Aaron Addison Gordon (born September 16, 1995) is an American professional basketball player for the Orlando Magic of the National Basketball Association (NBA). He played one year of college basketball for the University of Arizona before being selected by the Magic with the fourth overall pick in the 2014 NBA draft. In 2016, he was a part of a memorable Slam Dunk Contest in which he lost in a close matchup to Zach LaVine.

As a freshman in 2009–10, Gordon started in 28 of 41 games and averaged 11.8 points, 10.1 rebounds and 2.1 blocks per game. He also competed on the school's track and field team as a thrower and played summer basketball for the Oakland Soldiers.

As a sophomore in 2010–11, Gordon helped his team win Mitty's first state title in men's basketball. His team also captured the WCAL regular season and playoff crowns, CCS Division II title and Nor-Cal championship. They finished with a 32–2 record and closed the season on a 20–0 winning streak. He started in all 34 games and averaged 16.4 points, 12.5 rebounds and 3.6 blocks per game. He scored 17 points and hauled in a state championship record 21 rebounds in the 2011 title game.

As a junior in 2011–12, Gordon averaged 22.9 points, 12.8 rebounds, 2.6 assists and 2.3 blocks per game. In the state basketball tournament, he averaged 27.0 points per game before finding out he had been playing with mononucleosis. He was chosen as the California Mr. Basketball Player of the Year. The last junior to be Mr. Basketball in California was Tyson Chandler in 2000, and before him, Jason Kidd in 1991. 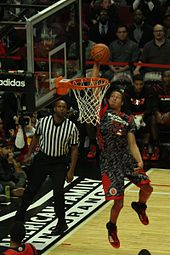 Gordon committed to the University of Arizona on April 2, 2013, announcing his decision in a press conference before the 2013 McDonald's All-American Game. After a 24-point, 8-rebound performance leading the West to a 110–99 victory, Gordon was named the game's MVP.

At Arizona, on February 13, 2014, Gordon was named one of the 30 finalists for the Naismith College Player of the Year. He was named to the All-Pac-12 first team, as well as earning Pac-12 Freshman Player of the Year and Pac-12 All-Freshman team honors.

On April 15, 2014, Gordon declared for the NBA draft, forgoing his final three years of college eligibility.

On June 26, 2014, Gordon was selected with the fourth overall pick in the 2014 NBA draft by the Orlando Magic. On July 2, he signed with the Magic and joined them for the 2014 NBA Summer League. After appearing in the first 11 games of the 2014–15 season, Gordon was ruled out indefinitely on November 16 after he fractured a bone in his left foot in the Magic's loss to the Washington Wizards the night before. He returned to action on January 18, 2015 against the Oklahoma City Thunder after missing 32 games. On April 4, he recorded his first career double-double with 10 points and 12 rebounds in a 97–90 win over the Milwaukee Bucks.

In July 2015, Gordon re-joined the Magic for the 2015 NBA Summer League, where he averaged 21.7 points, 11.7 rebounds, 2.7 assists, 1.3 steals and 1.7 blocks in three games. On November 4, 2015, he scored a career-high 19 points in a loss to the Houston Rockets. On January 31, 2016, he tied his career high of 19 points and grabbed 14 rebounds in a 119–114 win over the Boston Celtics. He went on to record 12 points and a career-high 16 rebounds the following night against the San Antonio Spurs. During the 2016 NBA All-Star Weekend, Gordon was the runner-up to Zach LaVine in the Slam Dunk Contest. Their battle through two tie-breakers in the final round drew comparisons to the showdown between Michael Jordan and Dominique Wilkins in 1988. Gordon utilised Stuff the Magic Dragon, his team's 6½-ft tall mascot, in his dunks; his final dunk involved him jumping over Stuff while passing the ball under both legs. On February 25, he had another 19-point outing in a 130–114 loss to the Golden State Warriors. Three days later, he set a new career high with 22 points in a 130–116 win over the Philadelphia 76ers. On April 13, in the Magic's season finale, Gordon tied his career high of 22 points in a 117–103 loss to the Charlotte Hornets. 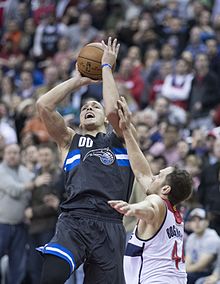 Gordon with the Magic in March 2017

Gordon led Team USA to the 2011 FIBA Americas Under-16 Championship gold medal, with team-highs of 17.0 points, 11.2 rebounds and 3.2 blocks per game. He went on to earn MVP honors, while leading the United States to a gold medal at the 2013 FIBA Under-19 World Cup, in Prague, where he averaged team highs of 16.2 points and 6.2 rebounds per game, in addition to shooting 61.2 percent from the field. He was also named to the 2011–12 USA Developmental National Team, and participated at the 2010 USA Basketball Developmental National Team mini-camp.

Gordon is the son of former San Diego State basketball star Ed Gordon. Gordon's great-great grandfather, a Native American Osage Indian, was seven feet tall. Gordon's older brother, Drew, is also a professional basketball player. His older sister, Elise, played collegiately for the Harvard women's basketball team from 2010 to 2014. As an eight-year-old, Gordon qualified to compete in the 100- and 200-meter dashes at the Junior Olympics, but chose instead to play in a basketball tournament.

Gordon is currently the president of athlete acquisition for the sports psychology app, Lucid, introduced to him by his mental skills coach, Graham Betchart.

Gordon made his acting debut in Uncle Drew, which was released in June 2018. 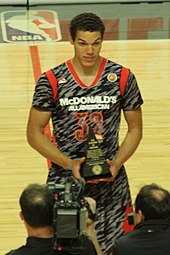 Gordon was MVP of the 2013 McDonald's All-American Boys Game. 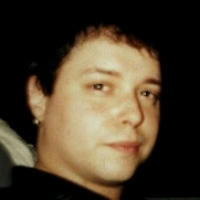 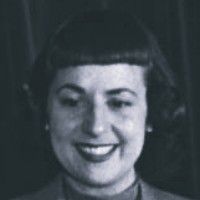